MY CRUISE UP SADDLE ROAD AND BACK TO KEAUKAHA!!!

KAHEALANI & I DROVE UP SADDLE ROAD TO GO TO KONA AND MEET UP WITH SOME FRIENDS FLYING IN FROM BETHEL, ALASKA!!!

WE DECIDED TO TAKE THE SADDLE ROAD BECAUSE IT WAS A BEAUTIFUL MORNING DRIVE...  HOWEVER DRIVING BACK TO KEAUKAHA WAS DIFFERENT STORY...  LOL!!!

MAHALO THOR & OHANA FOR COMING DOWN TO VISIT MY HOME IN BEAUTIFUL HAWAI'I NEI.  I HOPE YOU'VE ENJOYED YOUR TRIP AS MUCH AS I DID.  I HOPE IN THE VERY NEAR FUTURE WE CAN DO IT AGAIN...  VERY SOON...  LIKE NEXT SUMMER 2014!!!

WATCHING THE 56TH HAILI VOLLEYBALL TOURNAMENT IN HILO, HAWAI'II.  IT'S A ONCE A YEAR EVENT WHERE FROM ALL OVER THE PACIFIC AS WELL AS AROUND THE WORLD COME AND COMPETE FOR 3 DAYS OF INTENSE AND YET FUN VOLLEYBALL.

I'M CHEERING AND SUPPORTING TWO TEAMS:  "KEAUKAHA" & "HEMOLELE" WHOM MY FRIENDS ARE PLAYING FOR.

THE LAST TIME I PLAYED WAS BACK IN HIGH SCHOOL...  I ALSO HEARD THE RULES CHANGED UP TOO.

THIS IS ONE OF MY HIGHLIGHT OF MY TRIP HOME.
WAIPIO VALLEY!!!

HERE'S A BRIEF HISTORY OF THE LEGENDARY AND BEAUTIFUL WAIPIO VALLEY!!!

Located along the Hamakua Coast on the northeast shore of the Big Island of Hawaii, the Waipio Valley is the largest and most southern of the seven valleys on the windward side of the Kohala Mountains.

The Waipio Valley is a mile wide at the coastline and almost six miles deep. Along the coast is a beautiful black sand beach often used by motion picture production companies.

On both sides of the valley there are cliffs reaching almost 2000 feet with hundreds of cascading waterfalls, including one of Hawaii's most celebrated waterfalls - Hi'ilawe.

Waipi'o means "curved water" in the Hawaiian language. The lovely Waipi'o River flows through the valley until it enters the ocean at the beach.


Valley of the Kings

The Waipio Valley is often referred to as the "Valley of the Kings" because it was once the home to many of the rulers of Hawaii. The valley has both historical and cultural importance to the Hawaiian people.


According to oral histories as few as 4000 or as many as 10,000 people lived in Waipi'o during the times before the arrival of Captain Cook in 1778. Waipi'o was the most fertile and productive valley on the Big Island of Hawaii.

Kamehameha the Great and the Waipio Valley

It was at Waipio in 1780 that Kamehameha the Great received his war god Kukailimoku who proclaimed him the future ruler of the islands.

It was off the coast of Waimanu, near Waipio, that Kamehameha engaged Kahekili, the Lord of the leeward islands, and his half-brother, Kaeokulani of Kaua'i, in the first naval battle in Hawaiian history - Kepuwahaulaula, known as the Battle of the Red-Mouthed Guns. Kamehameha thus began his conquest of the islands.

In the late 1800s many Chinese immigrants settled in the valley. At one time the valley had churches, restaurants and schools as well as a hotel, post office and jail. But in 1946 the most devastating tsunami in Hawaii's history swept great waves far back into the valley. Afterwards most people left the valley, and it has been sparsely populated ever since.

A severe deluge in 1979 covered the valley from side to side in four feet of water. Today only about 50 people live in the Waipio Valley. These are taro farmers, fishermen and others who are reluctant to leave their simple lifestyle.

Aside from its historical importance, the Waipio Valley is a sacred place for Hawaiians. It was the site of many important heiaus (temples).

The most sacred, Pakaalana, was also the site of one of the island's two major pu'uhonua or places of refuge, the other being Pu'uhonua O Honaunau which is located just south of Kailua-Kona.

Ancient burial caves are located in the sides of the steep cliffs on either side of the valley. Many kings were buried there. It is felt that because of their mana (divine power), no harm will come to those who live in the valley. In fact, despite great devastation in the 1946 tsunami and the 1979 flood, no one actually died in those events.

Waipio is also a mystical place. Many of the ancient stories of the Hawaiian gods are set in Waipio. It is here that beside the falls of Hi'ilawe, the brothers of Lono found Kaikiani dwelling in a breadfruit grove.

Lono descended on a rainbow and made her his wife only to later kill her when he discovered a chief of the earth making love to her. As she died she assured Lono of her innocence and her love for him.

In her honor Lono instituted the Makahiki games - a designated period of time following the harvesting season when wars and battles were ceased, sporting competitions and contests between villages were organized, and festive events were commenced.

Another story set in Waipio tells how the people of Waipio came to be safe from the attack of sharks. It is the story of Pauhi'u Paupo'o, better known as Nanaue, the shark-man.

When you travel to the Waipio Valley today you not only step into a place steeped in the history and culture of Hawaii, you are entering one of the most beautiful places on the face of the earth.

NOW THAT YOU HAVE READ A SHORT HISTORY OF WAIPIO VALLEY, MY COUSINS TROY AND KANOE GAVE ME A TASTE OF THE "MANA" THAT EMPOWERS WAIPIO VALLEY.

I CANNOT EXPRESS IN WORDS WHAT IS LIKE TO JOURNEY INTO THE MAJESTIC AND BEAUTY OF "WAIPIO VALLEY".

IT HAS TO BE EXPERIENCED TO FEEL THE TRUE SPIRIT OF "ALOHA".  I CAN TELL YOU THAT YOU WILL FEEL THE SHIVERS THROUGHOUT YOUR ENTIRE BODY OR AS WE CALL IT, "CHICKEN SKIN" FEELING.

IF YOU EVER HAVE A CHANCE TO VISIT...  I RECOMMEND THAT YOU GO DOWN TO THE VALLEY AND EMBRACE THE "MANA" OF WAIPIO VELLEY.

I WANT TO THANK MY COUSINS, TROY & KANOE FOR GIVING ME & KAHEALANI AN "AWWWESOME" TOUR AND ALSO ALLOWING US TO HANG OUT WITH YOU FOLKS.  WE ENJOYED EVERY MOMENT AND ARE LOOKING FORWARD TO SEEING YOU FOLKS AGAIN.

MY LOVE & ALOHA GOES OUT TO ALL OF YOU FOLKS, KISS POHAKEA AND HULILI FOR US AND WE LOOK FORWARD TO MEETING UP WITH YOU FOLKS VERY SOON!!!

WENT DOWN FOR A SHORT CRUISE BEFORE I PICK UP KAHEALANI FROM THE AIRPORT WHO IS FLYING BACK HOME FROM O'AHU WHERE SHE WAS VISITING OHANA DURING HER "SPRING BREAK".

IT WAS SO GOOD TO SEE HER AGAIN.  SHE HAS GROWN SO TALL!!!

WE DID SOME SHOPPING AND OF COURSE...  I HAD TO GO TO THE "HILO FARMER'S MARKET" FOR SOME FRESH PAPAYAS!!! 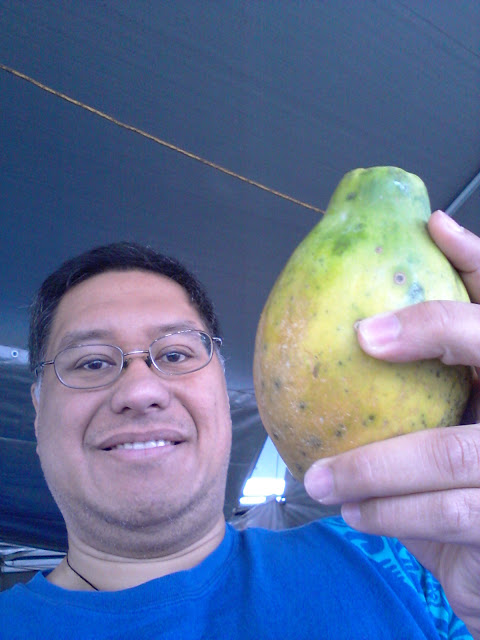 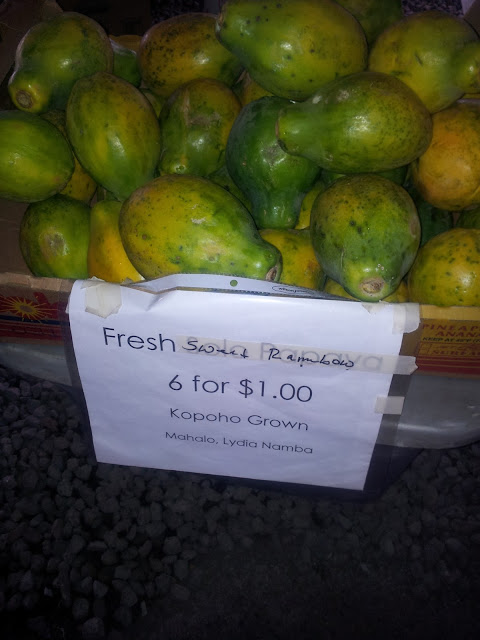 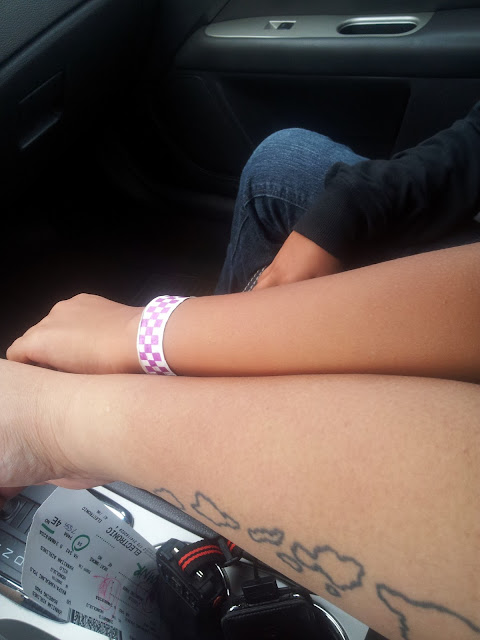 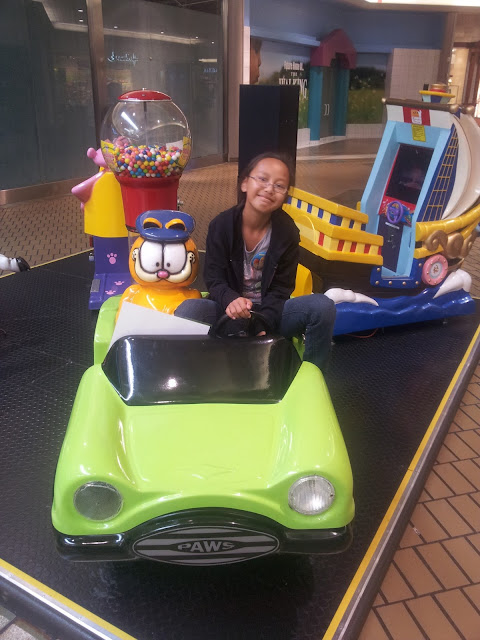 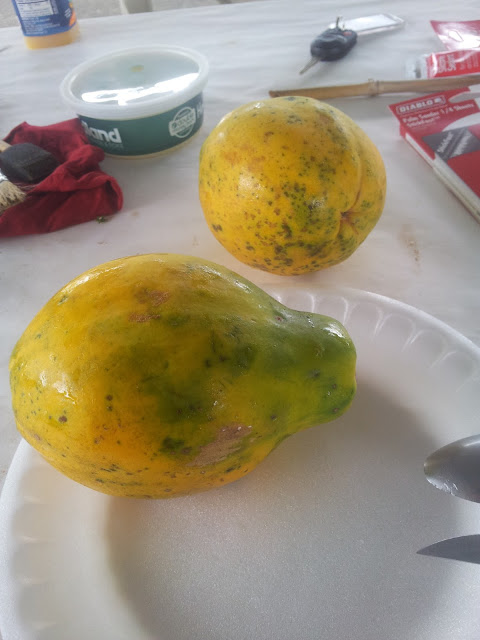 AND THEN I WENT TO ANOTHER STORE AND GOT SOME "POKE" AND SOYBEANS AND TOFU TO ADD TO MY PROTEIN INTAKE.  A GOOD WAY TO START MY DAY!!! 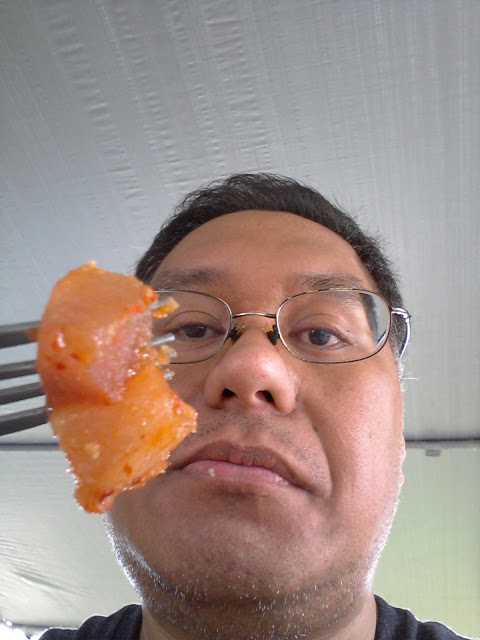 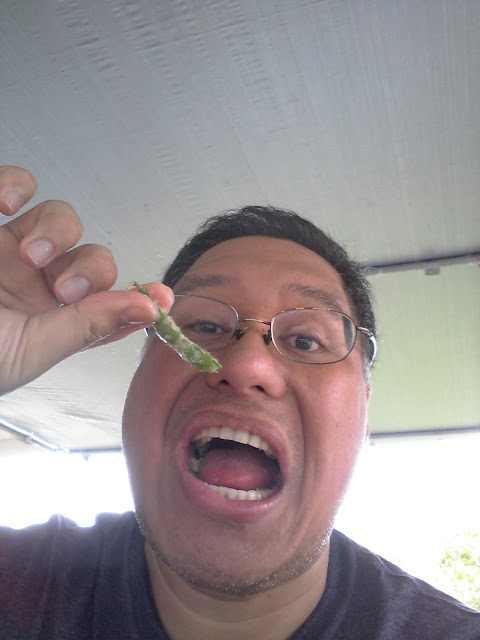 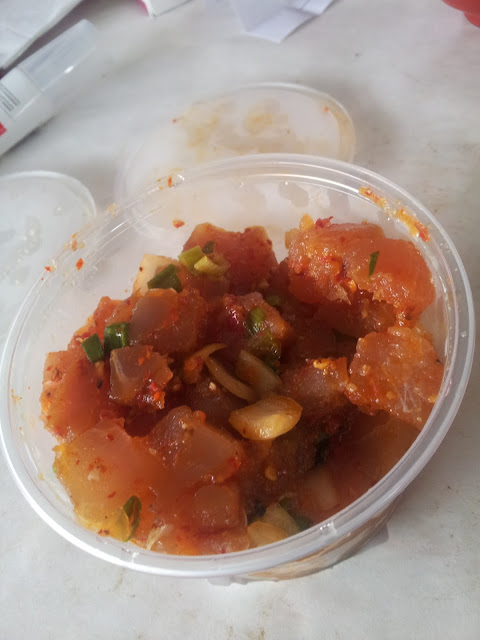 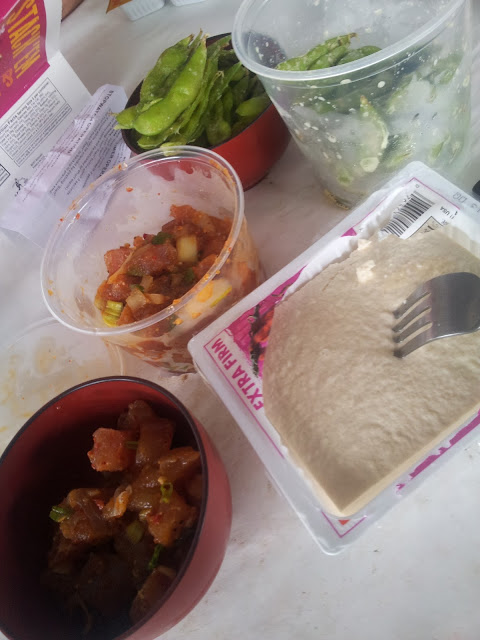 LATER ON IN THE EVENING...  I GOT TO HANG OUT WITH BRADDA IKAIKA WHO IS MAKING "LOMI-LOMI" STICK (MASSAGE STICK) WHICH IS PRETTY COOL!!! 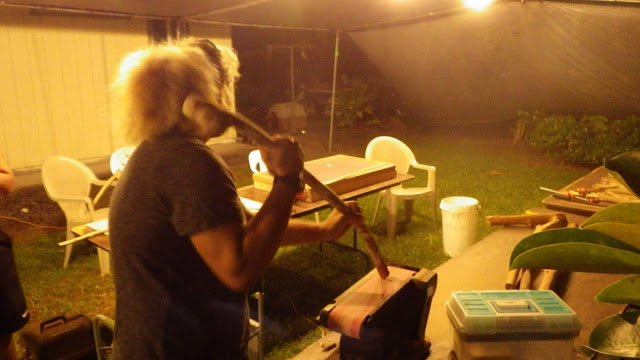 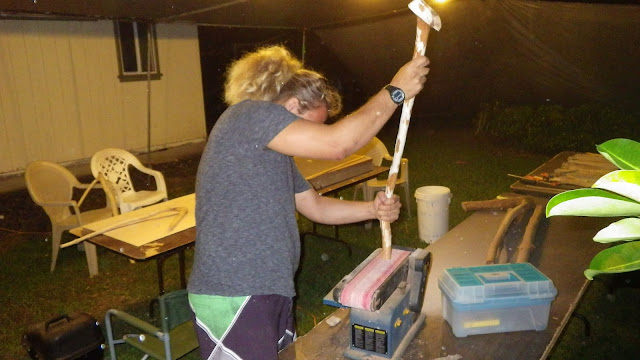 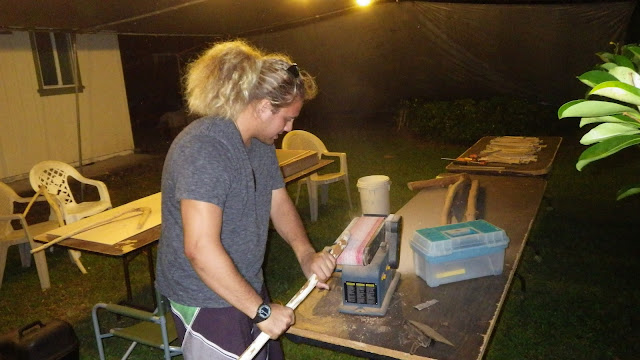 AND THEN TO FINISH THE NIGHT...  ME AND KAHEALANI JUST HANGED OUT WITH EACH OTHER UNTIL WE GOT TIRED AND WENT TO BED. 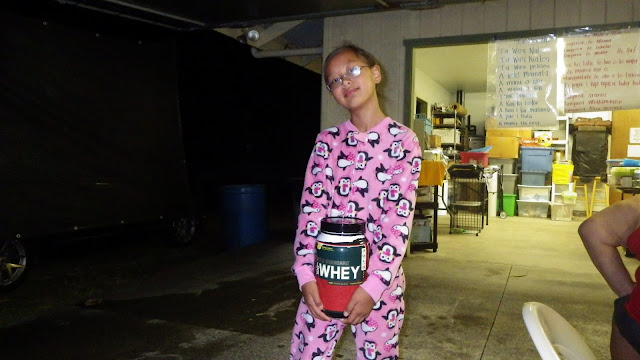 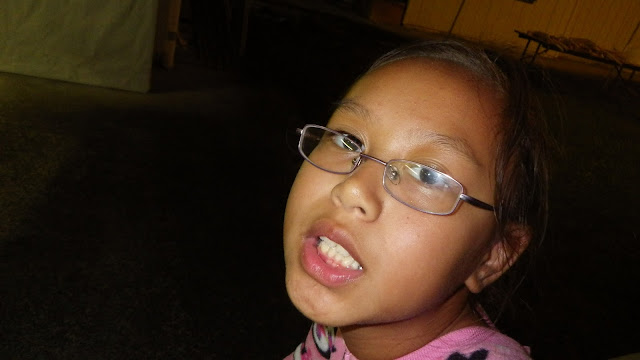 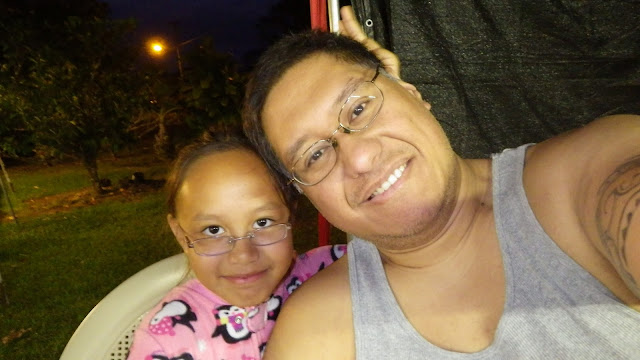 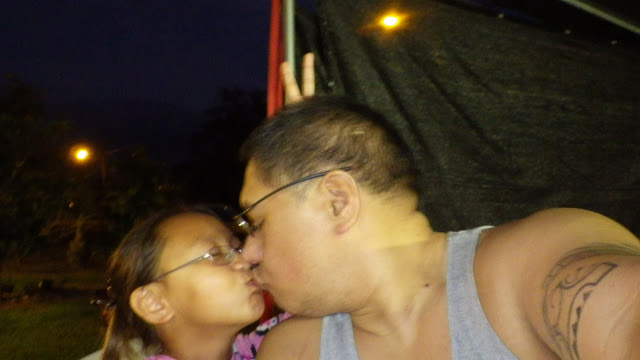 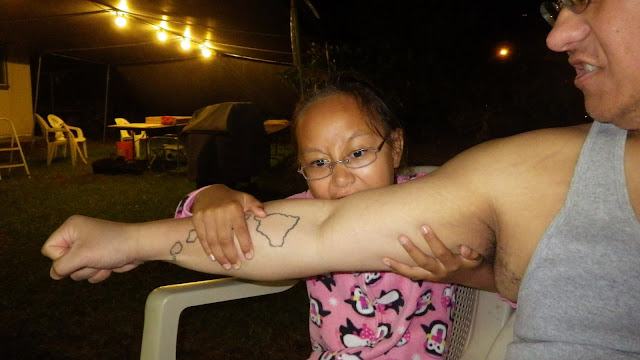 HERE IS THE BEGINNING OF MY "AWWWESOME" TRIP BACK HOME TO KEAUKAHA, HILO, HAWAI'I!!!

FROM BETHEL, ALASKA TO ANCHORAGE, ALASKA AND THEN TO KONA, HAWAI'I AND A DRIVE TO HILO, HAWAI'I!!!

IT WAS LONG BUT IT WAS WORTH IT TO BE BACK HOME SAFELY!!!

I'M BACK IN BETHEL, ALASKA AND I'VE YET TO UPLOAD AND SHARE ALL MY VIDEOS & PICS OF MY "AWWWESOME" TRIP BACK IN HOME IN KEAUKAHA, HILO, HAWAI'I!!!

PLEASE BE PATIENCE AS I HAVE MANY OTHER THINGS TO TACKLE AND I WILL BE BACK IN FULL FORCE...  "HAWAIIAN FULL FORCE" THAT IS!!!

AS FOR TODAY AFTER TAKING A WEEK OFF FROM RUNNING IN HAWAI'I DUE TO THE HORRIBLE "VOG" - http://en.wikipedia.org/wiki/Vog

IT WAS VERY HARD TO BREATH WHILE RUNNING...  AT LEAST THE OCEAN WAS ANOTHER ALTERNATIVE BUT AFTER TAKING A WEEK OFF AND GETTING BACK TO RUNNING AGAIN TODAY...  WAS A TOTAL BIG DIFFERENCE...

I WAS VERY OUT OF RHYTHM AND I WAS GASPING FOR AIR WITH MY HEART RATE SHOOTING UP TO 179 BPM!!!  YEP...  I BETTER GET MY ACT TOGETHER AND IT STARTS TODAY...  NOT NEXT WEEK MONDAY LIKE I SAID I WAS GOING TO...  TODAY!!!

MY BEAUTIFUL VIEW WHEN I RAN TODAY: 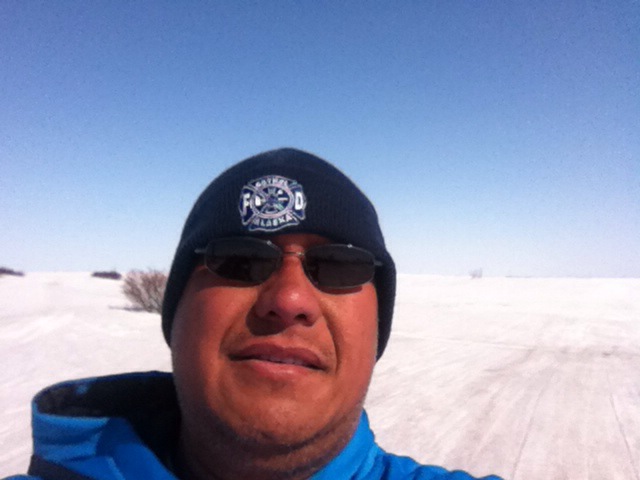 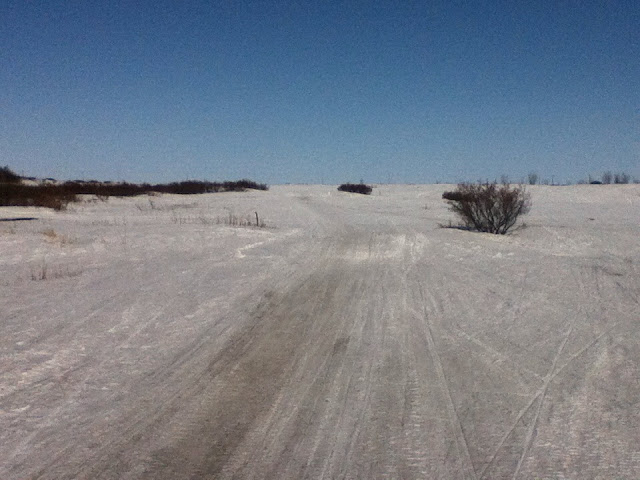 MY RUNNING TRAIL ACROSS FROM TRAILER COURT AREA!!! THIS GUY RUNS OUT OF GAS JUST ABOUT 50 YARDS FROM THE GAS STATION...  HE'S LUCKY TODAY...  AT LEAST NOT IN THE MIDDLE OF NOWHERE IN THE TUNDRA OR THE ON THE FROZEN RIVER/LAKES. 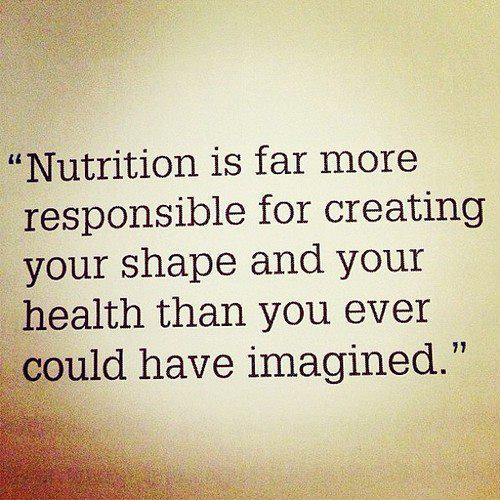 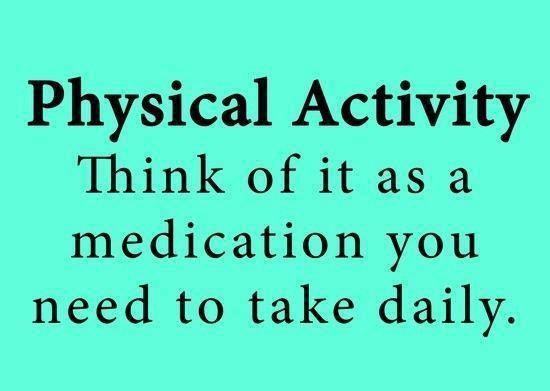 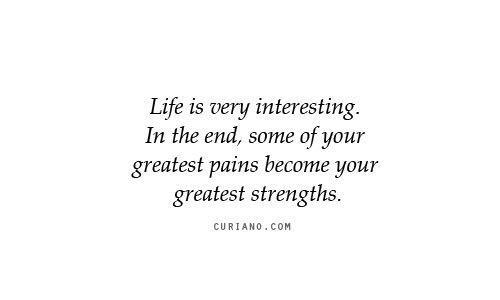